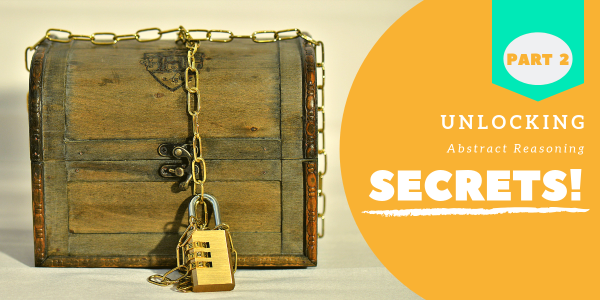 In PART I of this series we discussed how to approach Abstract Reasoning Test questions. In PART II we look at simple rules that are relatively easy to spot and won’t make you go cross-eyed staring at the screen. Clear your mind, focus and file away in your memory these common rules used by abstract reasoning question writers. Then when you attempt your next abstract reasoning practice test, try to apply these newly acquired insights.

Rules that are “easy for the eyes”

Once you have completed many sample abstract reasoning questions, you will start to recognise common and reoccurring elements. Some of these elements become easier to spot after a while, as they are not overly confusing and easier for your eyes to recognise. Let’s take a look at some of these rules.

Sometimes shapes or icons will change, because another building block or rule dictates that it does so. In the series above, the shape featured in each image block changes throughout the series because the rule states that the number of sides increases each step. In other cases, the shapes/icons may seem to change randomly, but from the first four image blocks of the series, you will generally be able to tell what will logically come next. In the series below, you can see that the icon to feature in the sixth image block will be a heart, because the icon only appears twice in the series before it changes to a differently shaped icon.

Over the series you may notice that one (or more) of the building blocks change colour – possibly alternating between black, grey, white or different patterns. This is the case in the series above, where you have an alternating patter of an icon being coloured and then uncoloured. Alternatively, the direction/the way the pattern is drawn may also change throughout the series – so keep a close eye out for that. In the image below, you can see the line pattern is rotating in a clockwise direction throughout the series. The next image block in the series will therefore feature a shape with vertical lines. Later when we talk about more complex rules, you will find that sometimes one building block may even affect another building block’s colour/appearance. This was briefly touched upon in Part I of this series, were we talked about “Building block(s) in the series change as a result of an interaction”.

Otherwise known as “every other step”. Keep in mind that a building block might not move in every step of the series – it could move only every second or third step. In the image below the circle moves very slowly, vertically from top to bottom in the series, but only moves to the new position ever other step.

Sometimes you will meet an abstract reasoning question that includes a building block that moves/behaves in a random manner with no logical rule attached to it. These evil little obstacles are simply distractors, designed to waste time. If you find yourself completely stumped by a building block in a series, don’t waste your precious time on it! You may be inadvertently trying to solve a distractor, which has no solution. Move on to the other building blocks in the series and try to find the rules governing them. This can produce two favourable outcomes. Firstly, you may successfully arrive at an answer option - revealing that the building block was in fact a distractor and is irrelevant. Secondly, by solving some of the other rules, it may reveal a rule associated with the building block you initially couldn’t solve or at least allow you to make a more educated guess from fewer answer options. Below is a very simplified example. The star randomly rotates and moves within each image block. Its existence in the series is irrelevant. The only logical rule present, is simply that the circle increases in size through the series. A good article which expands on this topic is: Abstract Reasoning: Visual Overload

A building block can repeat its movement very regularly (simply jumping back and forth between two positions throughout the series) or only repeat after the third or fourth step of the series (as seen in the example under “Movement & Position Changes”). The less a pattern repeats the harder it is to spot. In the example below, the heart jumps between three positions, following a triangular path from the bottom left position, to the middle top, down to the to the bottom right position, before repeating the sequence again throughout the series.

It is possible that you will encounter a situation, where the building block being observed cannot be seen at times. This is due to it being concealed by another building block. In the example below the bar moves right to left throughout the series taking one step each time. The star always moves in a right direction one step each time. In image block 3, the bar and start occupy the same position. We know that the start is still there, but we can’t see it because it is momentarily being concealed by the bar.

In Part III of “Secrets” To EPSO Abstract Reasoning Success we will expand our knowledge and explore the more complex rules employed by abstract reasoning question writers. 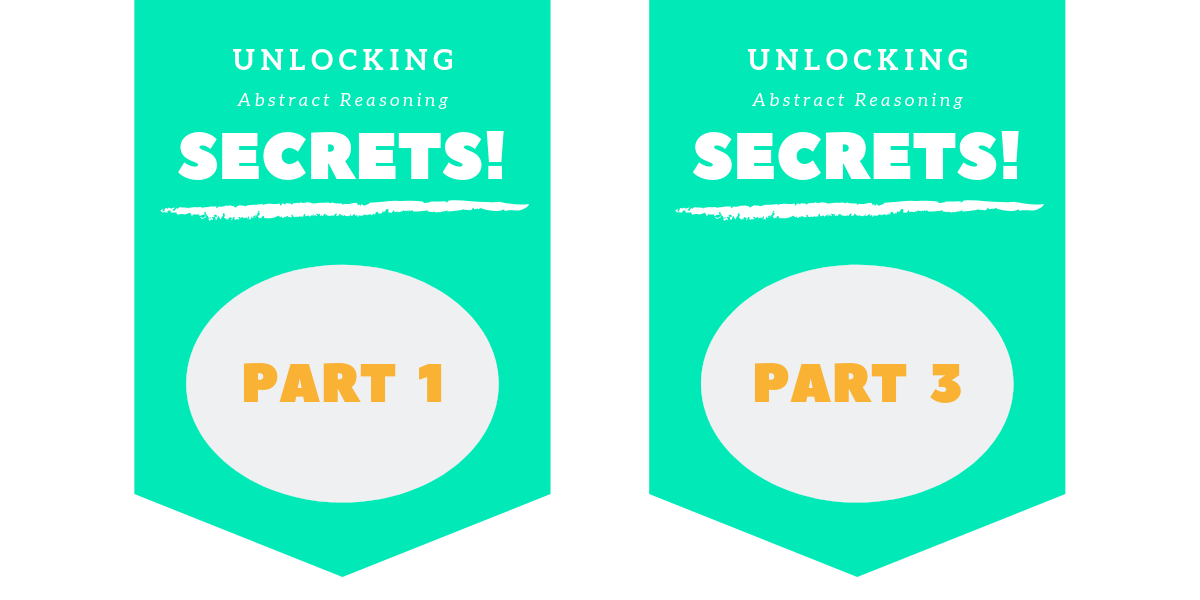