EPSO Competition Languages: How To Pick The Right Language 1 and 2 For You | EU Training
Skip to main content 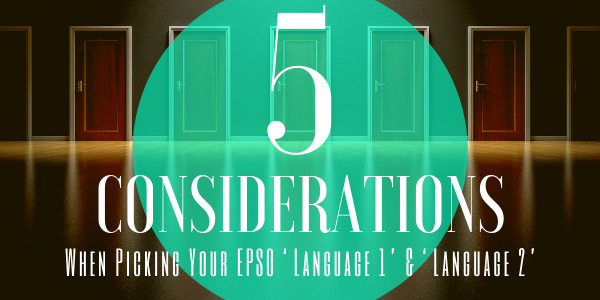 It’s happening!  You’re about to embark on an exciting journey towards an EU career by participating in an EPSO competition.

Now you'll need to pick at least two languages to complete the selection tests in, but before you do so, you want to be 100% sure that you’re making the right choice.

If you speak multiple languages, this decision could have a major impact on your performance in the exams - so you want to get this right.

Let's go over a few vital basics first before we dive deep into the key factors that you’ll need to consider when making this important decision.

All EPSO competitions will require you to speak/read/write in at least two official EU Languages.

Depending on the competition, you will also need to pick a ‘Language 2’ and possibly even a ‘Language 3’ if you are taking part in a Linguist or Translator competition.

Your Language 2 choice will be more targeted because EPSO will specify a very narrow selection of languages that you can pick from - most often it is only English, French and/or German.

Another important fact to remember about your Language 2 is that it has to be a language that is different from your Language 1 pick.

The language choices for most EPSO competitions are relatively straightforward because the language options are clearly stated in advance in the official Notice of Competition when it is released.

However, it works a little bit differently for the highly popular, annually run, EPSO Graduate Administrators (AD5) competition, because of its unique two part application process. This means there are a number of extra considerations that these candidates need to factor in when picking their competition languages.

Basically, here too, candidates need to pick a ‘Language 1’ and a ‘Language 2’ just like any other EPSO competition, but where this competition differs, is how EPSO arrives at the shortlist of possible Language 2 options - which can result in many candidates already being disqualified during the application process if they are not careful!

How EPSO chooses the Language 2 shortlist

For most competitions, EPSO will look at the language requirements of the role and create an appropriate language shortlist from that.

Often it is the operating languages of the EU institutions, to ensure candidates are immediately operational once recruited and can communicate effectively in their daily work. Hence why the Language 2 options will often be a combination of English, French and/or German.

Due to the large volume of applications received each year for the EPSO Graduate Administrators (AD5) competition (generally around 23,000+), EPSO has implemented a two-part application process for this competition where a maximum of 5 languages can be offered as a Language 2 option.

Now that we've got the basics out of the way, let's take a look at the key factors that you’ll need to consider when picking your EPSO competition languages...

#1 - The language specifications outlined in the notice of competition 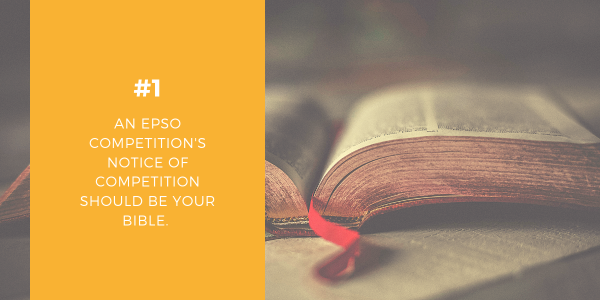 A competition’s Notice of Competition should be your bible. It is vital that you read this document thoroughly and understand clearly what the competition’s language specifications are.

For the 2019 EPSO Graduate Administrators (AD5) competition the notice states that:

You need to tick all of these requirements to be eligible to participate in the competition. 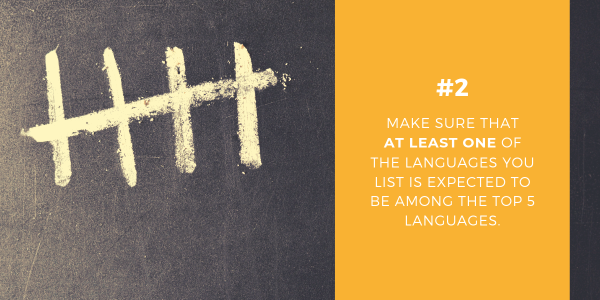 (NOTE: This point focuses predominantly on a unique challenge faced by candidates participating in the EPSO Graduate Administrators (AD5) competition.)

This is a fundamental point and a vital reason why it is so important that you include in PART 1 of your application ALL the official EU languages in which your knowledge is at B2 level or above.

Make sure at least one of the languages you list is expected to be among the anticipated top 5 languages, so you do not risk being excluded from the competition at the application stage.

If you didn’t list any of the potential ‘Language 2’ options in PART 1 of your application, EPSO will deem you as ‘not eligible’ and disqualify you. This means you will not even be allowed to complete the second part of the application.

For the last two years these were the top 5 languages listed by EPSO AD5 candidates: 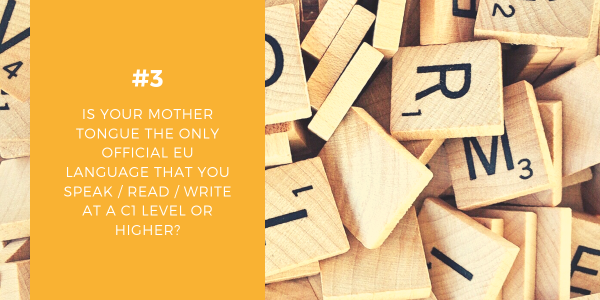 It’s not mandatory that you pick your mother tongue as your ‘Language 1’, but this choice does depend largely on how many official EU languages you can speak, read and write in at a C1 level or higher.

Remember, the notice of competition states that you must have a thorough knowledge of the language you pick as your Language 1.

For most EPSO competitions your choice in Language 2 or Language 3 is so specifically defined in the Notice of Competition, that unless you mother tongue is English, French or German, the chances are very high that you will pick your mother tongue as your Language 1. (Remember, in general EPSO competitions will require your Language 2 pick to be one of operating languages of the EU institutions - English, French and/or German)

For those candidates taking part in the EPSO Graduate Administrators (AD5) competition, you should also consider what the chances are of your mother tongue being among the top 5 languages listed by AD5 candidates, during PART 1 of the application process.

Being both a French and Spanish speaker is very different from being a Czech and Lithuanian speaker. These are different situations where some languages are more accessible given the number of candidates who speak them.

For example, I’m Hungarian, but I speak/read/write in Hungarian and English fluently. I could choose either as my Language 1. BUT! And this is a big but - it is highly probable that Hungarian will not be listed as a top 5 language. However, it is almost certain that English will be on the shortlist. So, my Language 1 choice would most likely have to be Hungarian and my Language 2 choice English.

If, however, your mother tongue is French, but you are also fluent in English for example, you could choose either language as your Language 1 and 2 - you are not restricted in any way.

So, if you happen to be one of these lucky candidates, you’ll have to factor in another consideration before making your final language choice - keep reading... 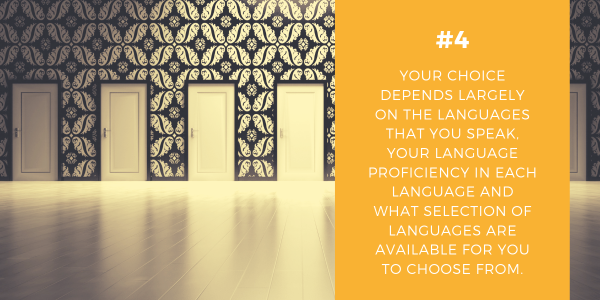 Whether you should choose your mother tongue for the computer-based reasoning tests or for the Assessment Centre is a complex decision because a number of factors come into play.

Your choice depends largely on the languages that you speak, your language proficiency in each language and what selection of languages are available for you to choose your Language 2 from.

All other tests - Situational Judgment Test, E-tray Exercise, Case Study and Assessment Centre tests - will need to be completed in your chosen Language 2.

It is important to be strong in your Language 1 so you can process the reasoning tests quickly and efficiently. However, don’t forget that the Situational Judgment Test and E-tray Exercise, which also require intense concentration and fast processing, will need to be completed in your Language 2.

Oral expression is an important part of the Assessment Centre, so is your written communication skills at the Case Study, which all need to be completed in your chosen Language 2.

Presumably, you're most qualified in your mother tongue, hence it may make sense to choose it as your Language 2, but if your mother tongue is not one of the top 5 languages then, unfortunately, there isn’t a choice - you will not be able to undertake the Assessment Centre in that language.

#5 - The quality of EPSO’s computer-based tests 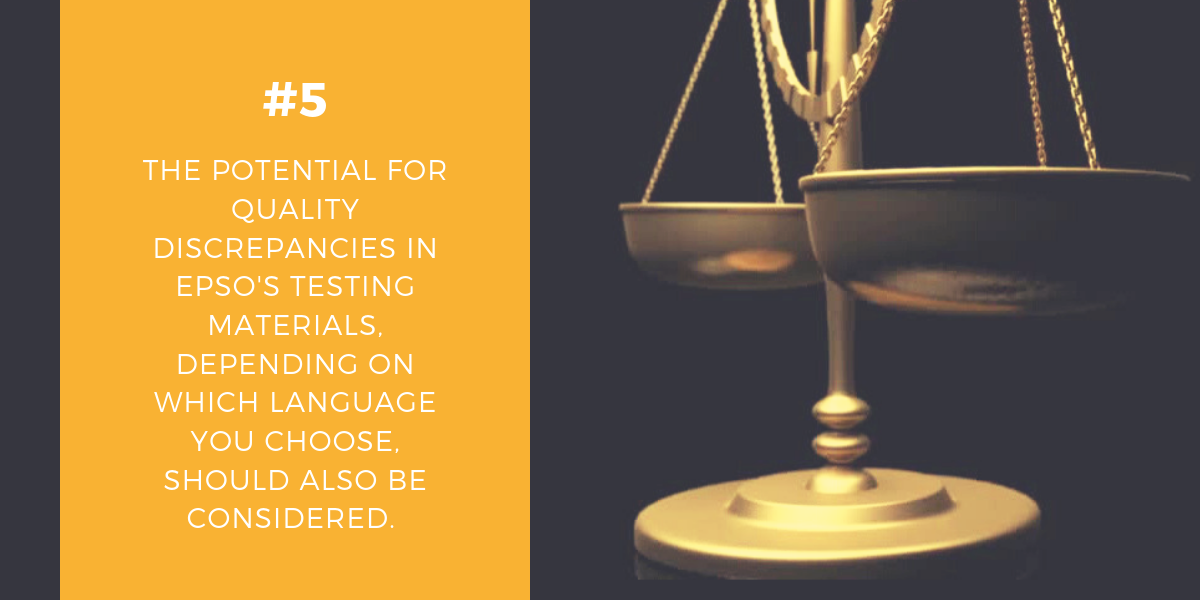 Over the past few years, many candidates have complained about the translation quality of EPSO’s Verbal Reasoning Tests.

Those that completed the test in “less popular” official EU languages found that some of the passages were poorly translated and hard to understand due to grammatical errors.

It seems that EPSO has responded to the complaints and has improved the quality of their exam materials. But nonetheless, the potential for quality discrepancies in testing materials depending on which language you choose for your Language 1 should also be considered.

A major change in the scoring of the EPSO Graduate Administrators (AD5) competition’s Verbal Reasoning Test, does to an extent lessen the impact of any remaining translation problems for this particular competition.

The scoring of the computer-based tests for each EPSO competition is different, and therefore the translation quality could have a bigger impact on tests scores depending on your specific competition.

Depending on the competition that you are undertaking, selecting a Language 1, 2 or sometimes even 3 can be a relatively easy decision or a very complex one.

Consider the specifics of your competition’s official Notice of Competition and the five factors listed above to make the right language choice for your personal situation.

Now go get that EU job!